The thawb, the traditional women’s dress of the UAE, refers to ‘a loosely comfortable garment with graceful lines that is a type of over-garment worn by women all around the Arabian Peninsula.’ It can be any type of robe or tunic worn over a kandurah (under-garment/tunic dress). Similar garments are worn by women from different parts of the Middle East and are known as hashmi/msarah/nashil. 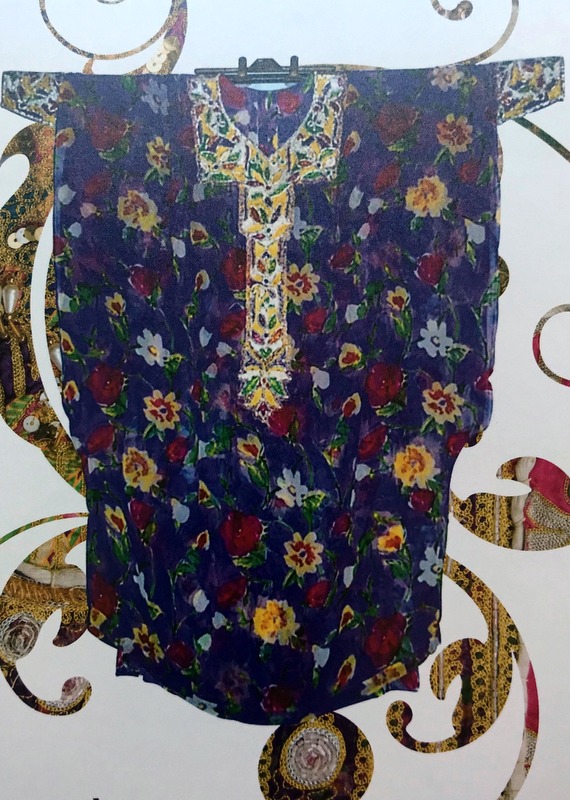 Example of the thwab and kandurah becoming one. UAE, late 1980s Basic shape of the Thawb with tail

The UAE thawb is ankle to knee length with the front and back centre panels (bidinah meaning body) cut from one piece, folded at the shoulder line.
The sleeves (jinan-ie-ajnab meaning sides) are rectangular panels similar to and attached to the centre panel. It usually extends to the hipline in one piece of fabric folded at the neckline
The lower side panels (gores) are made of two or more rectangles that run from the front to the back of the centre panels and are separated from the sleeves by an enlarged gusset (al-bat), usually made from a contrasting fabric.
The neckline (al halj) is an open square shape with an embroidered axis below. This sets it apart from thawbs from Iraq, Kuwait and Qatar which have a round neckline with a central buttoned slit.
The tail or train (al thayl) is three pieces of cloth sewn to the back hem of the garment. The centrepiece is the same width as the centre panel of the main garment (bidinah). The length varies but is usually equal to that of the lower side panels. A thawb is generally worn over a kandurah, but it can be worn on its own accompanied with underpants (shirwal) in private, for sleep especially during hot weather. The garment is spacious and does not cling to the body. When the wide sleeves catch the breeze, it keeps the wearer cool.

Introduced in the early 1980s, the abaya slowly replaced the thawb as a mode of concealment. The black abaya replaced the black thawb, and the women started wearing an abaya over a more vibrant thawb when in public.

The introduction of modern clothing and the use of air-conditioning in buildings eliminated the use of a thawb at home. It was not needed to keep cool and it was too cumbersome for the modern lifestyle. Instead, the thawb became a symbol of the formal traditional dress of the country and is increasingly used in public at official gatherings and celebrations such as weddings. Up to the 1960s, the thawb was a very simple garment made from gauze cotton or nylon net fabrics with only a few simple lines of teli on the neckline. In the early 1970s a simple square dress, known in the region as the ‘UAE thawb’ became very popular. The availability of wider width imported fabric did away with the more traditional three panelled garments. Foreign tailors who did not understand the traditional tailoring methods working in the UAE started improvising and adding their own stamp.

They simply folded the fabric to create a front and back with a neckline cut on the fold. The sides were stitched from the hip to the lower hemline leaving wide openings for the arms, doing away with the sleeves (jinan) As a result of new wealth and modern tailoring shops geared towards mass-production, the embellishment around the neckline became more elaborate, reaching lower down the front of the garment and including rich embroidery patterns.

The matching ensembles did away with the tradition of wearing a thawb on its own, and in the 1990s the two garments were merged at the neckline creating a double-layered garment. Inspired by the international interest in the kaftan style dress, UAE women continued to modernise their traditional outfit by adapting the kandurah to resemble a short-sleeved or sleeveless slip dress worn underneath a matching thawb-style outer layer. The decorative embroidery also set itself free from the neckline to cover different areas of the garment such as the lower hem, the entire front of the garment and the sleeves. To date, most UAE women wear the thawb during celebrations and social gatherings such as weddings. Besides appealing to the local taste, it is viewed as an admired symbol for upholding traditional customs. Younger UAE women are more accustomed to modern international dress and seldom wear the thawb. The future of the thawb as a useful piece of a modern UAE woman’s wardrobe is uncertain. Will it stay relevant or will it become folklore only to be used as a costume during traditional occasions? Time will tell.

In the next post, we will look at the history and design of the traditional UAE kandurah (tunic underdress). If you have a story or memory about traditional Arab dress in your family, we would love to hear about it. Please contact us.