Jewellery is an unmistakable part of the traditional dress in the Arab world. It is not only beautiful adornment but fulfils many other functions as well. In this post, the many stories that jewellery can tell us will be introduced.

Like other elements of dress, jewellery communicates the identity of a woman. Some jewellery designs are limited to one tribe or one location only, and clearly show where a woman is from. In Morocco, for example, the details on clothing pins (fibulas) differ ever so slightly from village to village, from region to region. Bracelets in Palestine show whether the wearer is from Hebron or Bethlehem, and the jewellery from a woman in Nizwa is different from that of a woman in Muscat. These differences find their roots in tribal and regional traditions, while the similarities tell us about trade, migrations and contact. Jewellery from coastal Yemen is sometimes indistinguishable from jewellery worn in Ethiopia, on the other side of the Red Sea: the jewellery shows how close the cultural contacts were. To the attentive observer, jewellery also reveals the social status of a woman. Unmarried girls wear only a few pieces of jewellery, but this changes when they reach the age of puberty. Together with changes in dress and hairstyle, jewellery items reveal whether a girl is eligible for marriage or betrothed. Upon her wedding, a woman will often assume a different way of dressing, a hairstyle befitting of married women and jewellery that clearly signals she is married. After becoming a mother, new jewellery is added: in the region of Great Kabylia, Algeria, for example, a woman receives a piece of jewellery upon the birth of her first child, and in Egypt and Libya new mothers wear a typical necklace with silver pendants.

Set of rings worn by married women in Oman

For a woman, her jewellery collection is also her financial security. Her jewellery is hers to keep in case of a divorce. This is one of the main reasons why negotiations concerning the dowry are taken very seriously when it comes to jewellery: it is the bride’s savings’ account. Jewellery is sold when money is needed and bought when there is extra income. All over the Arab world, traditionally women would invest in jewellery items that could be sold when the need arises. The weight of a jewel is more important than the way it is decorated or even how old it is because the weight of the silver of gold is what counts. 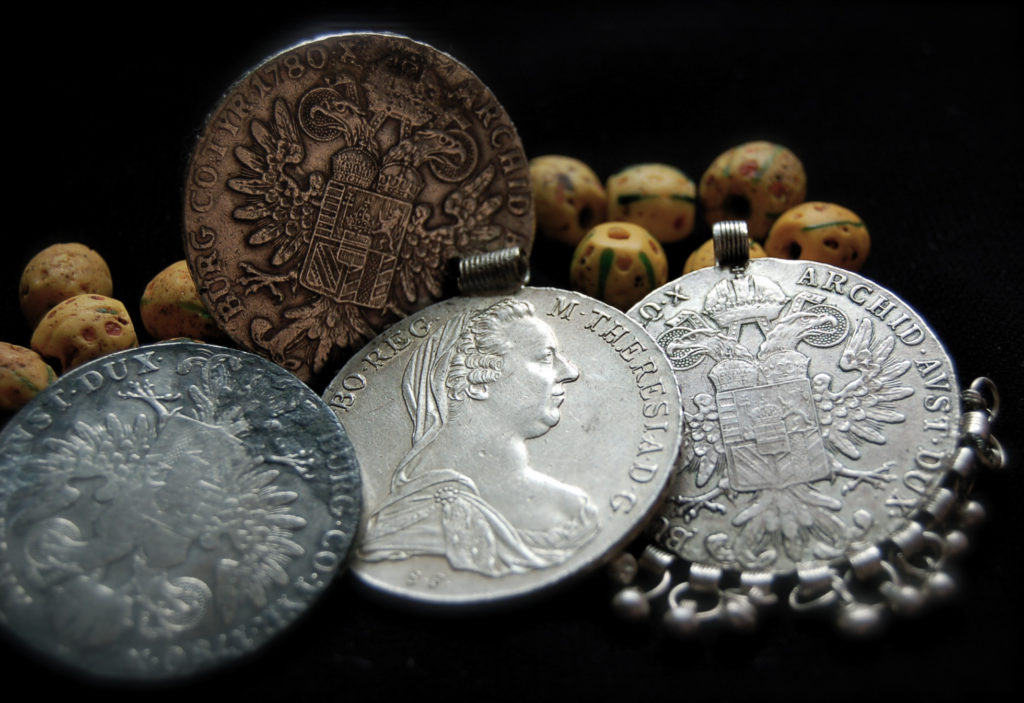 A final use of jewellery is as protection for the wearer. Many jewellery items double as amulet or talisman. Bells jingling on an ornament were thought to keep jinn at a distance, pendants in the form of an amulet container and beads in particular colours helped to keep evil away. Especially children wore amulets to protect them from accidents and illness. Many of the motifs found on jewellery are also found in embroidery and weaving, thus creating unity between dress and jewellery. A bracelet worn in the Hebron area and Sinai. The decoration of stylized turtles was thought to bring fertility and prosperity.

All of these and other subjects surrounding jewellery are fascinating. In future blog posts, I will share jewellery items from the Arab world and their stories with you!