The Zay Initiative works with a select group of experts from around the globe. Each person brings with them a unique set of skills and knowledge from within their own fields of cultural dress and textiles. Over the next few weeks, we will introduce them all to you.

Founder, Reem El Mutwalli, shares her memories of when she first met Widad Kawar about twenty years ago: “I first met her when I visited her at her beautiful home in Amman. I accompanied my mother Buthaina al Khadi and aunt Amal al Khudairy who is an old friend of hers.

She welcomed us to her living room with the old Damscan hand painted wooden ceiling. I felt that I was transported to an earlier era of Arab splendour. After the Arabic coffee ritual ended, she walked us down to her basement where she kept her collections.

Cupboards, drawers, piles, shelves all full to the brim, room after room housing her collection. There was a group of young interns from Japan working on documenting some pieces, another group was busy taking photographs, while a third was just walking around with a guide as she described some objects. The sharp contrast between the quite elegant upstairs and the lower busy hub, dusty stacks and dimly lit interiors left an impression on me.

We were soon escorted to the garden for a home-cooked lunch. We spent the rest of the day there listening to her stories, concerns and aspirations as she was just beginning to think of creating her museum. What a formidable woman who persevered alone on a mission where nations have failed to conquer!”

Widad was born and raised in Bethlehem and studied in Ramallah and Beirut before settling in Amman, Jordan with her family, where she established the Tiraz Centre, a home for Palestinian, Jordanian an Arab heritage.

“I grew up in Bethlehem and studied in Ramallah, both of these cities were treasures of heritage and traditional styles. Both were weaving and embroidery centres and marketed their products to the women of other villages.

I saw and felt the influence of the Arab-Israeli war of 1948 on the people. The beautiful picture I had of the village women dressed up in their best costumes and coming in groups to the market in Bethlehem had vanished. Because their village had been occupied or wiped out these women and their families were settled in refugee camps – facing a new style of life and a new ‘camp culture’.

This situation encouraged me to put forth a strong effort to collect costumes with information about them from their owners. I was fascinated by the beauty of the costumes I found but even more interested in the women behind the dresses.“

For Widad, each item in the collection reminds her of an individual or a place. A wife, a mother, a daughter. A family, a house, a village. A field or a market. Each item was worn on a special occasion – happy or sad – that marked the owner’s life. Much of Widad’s knowledge stems from the personal stories of the women who made and worn these dresses.

“After the war of 1967, I faced a new reality – all the villages in Palestine were now occupied and I had to double my efforts to collect genuine pieces before they were lost or influenced by the refugee camp styles.

The women whose heritage I collected remain my inspiration. They have honoured me by sharing their memories of the past with me. They inspired me to pass this rich cultural heritage on to future generations.”

Over the years, the Widad Kawar Collection has grown to be the largest collection of Palestinian and Jordanian dress in the world. It also includes items from other countries in the region like Egypt, Lebanon, Saudi Arabia, Syria, Turkey and Yemen. In 2014 the Tiraz: Widad Kawar Home for Arab Dress was opened to the pubic in a building next door to Widad’s private home. The collection is preserved in a specialised environment and a living archive is being created based on research and oral testimony.

Without her knowledge, enthusiasm, and willingness to share, much of what is now known would be lost to mankind. As a continuation of this desire to encourage research Widad has set up a resource centre to encourage scholars, students, and other interested people in this heritage to come and study with access to her fine library, database of the collection, articles, photo archive, as well as the costumes and accessories themselves.

Widad Kawar has written and co-authored several books on Palestinian embroidery and textile heritage. She has also contributed towards other publications, articles and exhibit catalogues. Some of the more popular books are:

Widad Kawar has received several awards for her work, the latest being the Prince Klaus International Award for Culture and Development for ‘her invaluable contribution to securing global cultural heritage.’

To learn more about Widad Kawar and The Tiraz Centre visit their website. 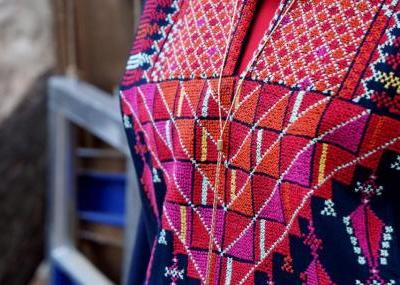